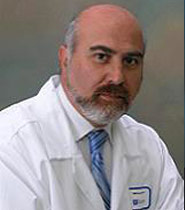 Dr. Salehian earned his medical degree from the Shariat Medical School in Tehran, Iran. He completed his internship and residency in internal medicine at the hospitals affiliated with Tehran University, and then completed a fellowship in endocrinology. He relocated to Paris, France and worked for several hospitals before immigrating to the United States.

Dr. Salehian then completed a second internship and residency in internal medicine from the University of Nevada at Las Vegas and at the Charles Drew University of Medicine and Science/Martin Luther King, Jr. Medical Center, Los Angeles, CA. He completed two years each of research and clinical fellowship in endocrinology at the Harbor-UCLA Medical Center, Torrance, CA, and received a dual academic appointment as Assistant Professor of medicine in the division of endocrinology and metabolism at Charles R. Drew University.

Since 2007, Dr. Salehian has been practicing in affiliation with the City of Hope National Medical Center and the Beckman Research Institute, Duarte, CA.