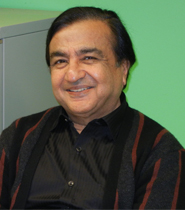 Diseases of Lungs and the Respiratory Tract

Dr. Batra earned his medical degrees from the Armed Forces Medical College, Pune, India and at the All India Institute of Medical Sciences in New Delhi, India. In the United States, he finished his training in internal medicine as an intern and resident at the Mount Sinai Hospital, Chicago, IL. He also undertook a fellowship in respiratory diseases at the Johns Hopkins University Medical Center, Baltimore, MD.

Dr. Batra then spent four years at the Temple University Hospital, Philadelphia, PA, where he served as Director of Bronchoscopy Services and as an Assistant Professor of Medicine. In addition, he worked as the Director of the Respiratory Department at Phoenixville Hospital in Phoenixville, PA.

After a year as the Director of the Asthma Clinic and Respiratory Clinical Laboratory at the City of Hope National Medical Center in Duarte, CA, Dr. Batra has been in the private practice of pulmonology in Santa Monica, CA for the past 33 years. Over the last three decades, he has been active both locally and nationally in the Association of Physicians from India.